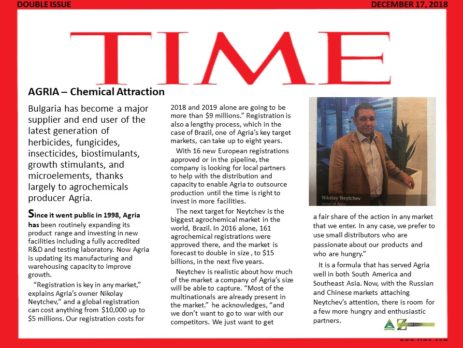 Оpen up new markets and developing existing ones is AGRIA’s target for 2019 to achieve growth in agchem sales. This was stated by the company’s owner Nikolay Neytchev for Time magazine in an interview published in edition 51 from 17-th of December.

To achieve the target, the company will focus in the maintenance of the existing and investing in new registrations on key markets like Brazil and Europe. “Registration is key in any market and requires huge efforts. The investments in registration program of the company for 2018/2019 are going to be more than $ 9 million” explains AGRIA’s owner.

AGRIA obtained around 70 registrations of more than 10 formulations in the EU during last couple of years and expects at least that much in 2019. Some of the registered formulations are related to the company’s specialty – dithiocarbamate fungicides, where experience dates back to 1962 – Mancozeb 80 WP, Mancozeb 75 WG and the mixture Mancozeb + Cymoxanil WG.

Others are based on the company routine expanding like the mixture Cymoxanil + Copper hydroxide with the trade names Copforce Extra WG and Cupman WG. This is formulation without analog – two active ingredients with different mode of action are precisely locked in every single granule to ensure residual protective and prompt curative effect.

In Brazil, which is going to be priority market for AGRIA group in 2019, two new products are already obtained in 2018 – Cuprosate Gold 720 WP and Simbio Mix – both mixtures of Mancozeb and Cymoxanil. The new formulations together with the existing Brazilian registrations of Mancozeb alone will support company intension for growth in the biggest agrochemical market in the world.